Italy at the last gasp attacks Veneto: today hundreds and hundreds of Venetians brought inside Carabinieri’s headquarters. Perhaps to make them recant their support for Venetian National Party?

How scared is the Italian state of Venetian independence and how many votes is the Venetian National Party gaining to justify such an undemocratic act worthy of the most brutal police regime? 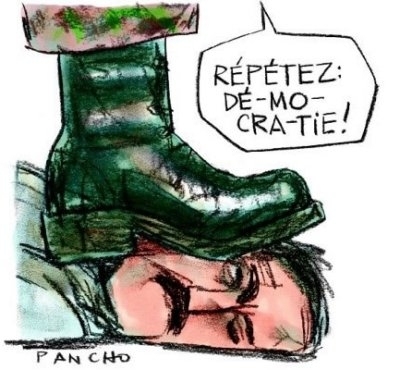 Today it happened – and as we write it is still happening – a serious event without precedents, that in our opinion undermines the democratic base of this state, that probably reached the end of its days.

Today Friday May 29th, several soldiers of Carabinieri, and of the Guardia di Finanza – it is inexplicable why this other set of Italian military was activated, if not to do a dirty job – are conducting an thorough inspection toward hundreds of Venetian citizens who signed in support of the electoral list of Venetian National Party for the province of Padua.

We do not know the reasons that have led the Army to dedicate such a particular attention to who has permitted us to present ourselves to these local elections, letting us perform a totally democratic course. We leave to our lawyers the legal consequences, even considering the information that will emerge.

We are profoundly saddened and shocked, because we are learning of details that are troubling considering how these inspections are being conducted. We do not find justified that inside private homes of hundreds of Venetian citizens, without even any pity for the elderly, these uniformed men show up, often without even giving reasons, representing the Italian state, sometimes even in a rough manner and lacking any respect, to conduct interrogations that we learn are quite vague, or intimidating by commanding to show up at the Carabinieri’s headquarters without giving any further reasons.

These news come from all over the province: Saccolongo, Albignasego, Cadoneghe, Cittadella, Grantorto, Candiana, Polverara and so on. Entire families of our supporters are humiliated by having the Carabinieri ring their doorbell, perhaps in front of neighbors, wondering “who knows what they have done”.

Let’s for an instant imagine how these poor citizens are feeling by being forced under such an unorthodox questioning and being asked if “do you know Pnv”, or “have you undersigned an electoral list for Pnv”, or if “your signature for Pnv has been extorted” perhaps with an unfriendly tone as it has been reported to us in some case.

Orders like “show up at the Carabinieri’s headquarters no later than Monday morning”, of “you are obligated to show up at the Army compound by June 5th ” do not give certainly a feeling of democratic respect toward those who undersigned our list.

Actually, our fear is that in this situation some people are put in a difficult situation and in fear would even recant to have signed, or would even pretend to not recognize it. We can say that any Venetian who wants to avoid problems, in front of a uniformed Carabiniere that asks such questions, is at a minimum put in a difficult situation and that at least would be tempted to take a step back. On the other hand we are encouraged by the fact that many are not being intimidated by the representatives of the Italian Army: among all we indicate a courageous elderly woman over 90 years old who made the Carabinieri flee using her walking stick! Others instead have called crying telling us that they regretted signing for Pnv, because they did not think they would end up inside the Carabinieri’s headquarters for this.

We suggest that in any case all Venetian citizens always ask the name, last name, and identity card of who brings forward such operation, that in all evidence is conducted with political motives. Is all of this democracy? To us actually it looks like something entirely different, it looks like a taste of the police state that Italy wants to impose to hit Pnv, Venetian National Party, that is the first to have decided to ask popular consensus among Venetians indicating a righteous objective to strive for, that is Venetian Independence, to reach through a democratic referendum with observers from the international community. It is clear that the state is showing a lot of fear. We ask ourselves if it is not this exact reason to cause such a “dedicated” attention, since there is no other similar attack to other lists that are participating at the provincial elections. Are we so fearsome to the Italian state, that are trying with all their might to corner us, even by scaring our supporters?

These people know the polls and the voters’ intentions much better than us and the thought that arise naturally is that our communication is bringing us more consensus that the Italian parties had predicted.

Other questions arise naturally: is there a secret archive in some office of these deplorable Italian cast that is masterminding such a deplorable repressing operation of political flavor?

An archive clearly not authorized and in spite of any considerations on privacy, in which names, last names, age, and any relations are already collected? Maybe from today this secret archive that we imagine existing within the Ministry of the Interior will report also a character profile depending on the answers that our supporters are giving…

It is reasonable to ask if all this, because what is happening these days – and we say it very serenely – is anything but normal.

Actually, we have already obtained our victory, because thanks to the repression targeted to avoid that our lists participate in the elections, we are gaining a lot of solidarity and support that makes us understand that we are proceeding toward the right path.

We can say that if the Italians want to avoid that we participate at the next elections, then they will do us a great favor, since that they will make it easier for us to gain greater support for a wide victory at the following regional elections, when the Venetian National Party will give an eviction notice to the Cast that is keeping under Italian domination.

Certainly, when we started the Pnv we know that the time would come when we would be found irritating, When we wrote “Veneto 201X independence and happiness” we knew that that instead of that X there would be a small number, perhaps a 0, 1 or 2 and for this reason we got ready: Italy cannot do anything, because our party is digital, of a new generation, indestructable. We are a virus, the virus of independence and happiness.

For this reason we will prevail.

Up with Independent Venetia!