Silence and lies, or the historians’ work

For a number of reasons I regret to be in the US right now. Veneto Stato is doing a great job and the independence of Veneto becomes closer day after day. I do miss my Como students, my Euganean hills, my family and Liguria, and, in general, I realize that a life of monkish solitude is not the best for me. At the same time, for an equivalent number of reasons, I am happy to be in Indiana right now. For, being here, I am spared the obscene show offered by Italian historians on the eve of the celebration of the creation of the Italian Kingdom. This is to me much more disgusting than Mr Berlusconi’s orgies, which at least include a certain degree of (staged) vitality. There are basically two ways to falsify the past, as much as a peculiar entity like the “past” is subject to falsification. The first form of falsification is obviously the lie. For instance, when historians deny the Napoleon met with a fierce popular resistance in Italy, they certainly lie, even though the popular resistance never reached the Spanish peak, once for all brought to evidence and amply depicted by Ronald Fraser in his magisterial Napoleon’s Cursed War (2009). Btw, this is a book that should foster similar comprehensive research for the anti-Napoleonic resistance in Italy. It is a pity that senior historians like Agnoli and the Roman “Istituto per la Storia delle Insorgenze” publish only in Italian. It is a lie, too, to deny that there was a popular resistance against the 1866 annexation, that the Savoy troops perpetrated a true ethnocide in the former Kingdom of the Two Sicilies, that the ensuing colonial practices of the Italian wannabe Empire were to say the least comparable to the worst atrocities committed by the Belgian in Congo or the Germans in nowadays Namibia. From the point of view of the development of historiography, those lies have been strenuously corrected by historians like Angela Pellicciari, Pino Aprile, Nicola Zitara, and quite a few others. Now, the fact that most of those historians are not part of the Italian academic world does not mean that they do not practice their profession with the best possible skills and a profound vision.

The second form of falsification of the past, after the lies, is that of silence. Told otherwise: some episodes, cases, and so on, are deliberately ignored by historians, especially those driven by the (Italian) State and its never quenched thirst for legitimacy. Morally speaking lies equals silence. The sin of omission is by all means a major sin. Official historians, simply by means of silence, avoid accusations and escape direct moral blames. In the construction of the 19th-century national States, how many lies and how much silence did the historians sacrifice on the altar of their “patriae”, of the states who paid them? 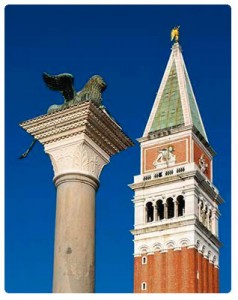 At the same time, we need to be cautious when re-habilitating historical truths, especially when those rehabilitations might (and indeed do) serve political aims. It is true that there were fierce defenders of Venice in 1796, the “Pasque Veronesi are a telling and poignant episode, and so on; but it’s also true, that within Venice and the Venetia there were staunch defenders of Jacobin and later Napoleonic ideals. Ugo Foscolo was a true Venetian, born in Zante. But he counted among the most stubborn enemies of the Serenissima. From at least 1830 there were strong philo-Savoy agents and a strong pro-unification party in Padova, for instance, and in Polesine. Free masons, “carbonari”, enemies of the clergy of various sorts, they all helped, from within, the 1859 and later on, the 1866 events. It would be easy to label them as the “Quislings of Venetian history”, but then we would be unjust towards the sincere ideals of those people, or at least of a great number of them.

In our free Venetia, whoever will write history, she will have to observe the rule of impartiality; but also that of comprehensiveness. Most of the traditional history handbooks, junk distributed at high price from elementary to university level in Italy, are full of lies, but most of them are full of silence. They cover up with a curtain of silence historical evidence. This must be avoided. In order to understand why the Serenissima reached its end, we have to rely also on biased sources, from our point of view at least, like Nievo’s Memorie di un ottuagenario.    Nievo was an ardent “patriot”, but his love for Italy was reciprocated by means of a sheer assassination, his own, in the most unlikely and staged shipwreck of 19th-century Mediterranean.

The passions of a politician should be abandoned when writing about history.  A sincere passion for truth must animate and fuel the historical work. Interpretations should be limited, erudition and archival research, on the contrary, unrestrained and unconstrained. In the case of the ethnocide perpetrated by the Savoy troops in the Kingdom of the Two Sicilies, documents have been always there, only, most of the historians on the State’s payrolls refused to deal with them. That is the main reason why we can call them liars, but, first and foremost, non professional historians, in spite of the chairs they occupied in Italian (and not only Italian, but British and French too) universities. A French historian working on the long ‘Risorgimento’, Gilles Pécout, omitted in his book to mention that among the little, “paltry”, decadent States of pre-unified Italy there was the Serenissima! He knew there was, I guess. A mistake in proof-reading?

When Veneto will be once again free, a new season will open up also for historians. It will be no longer necessary to uphold a State system which, like in the case of Italy, needs a huge quantity of lies and a parallel dose of silence (including those provided by bounty historians) to survive.

While most of the research work conducted on the Serenissima, 697-1797, is of excellent standards, quite obviously those standards degenerate for the period, quite shorter, 1797-2011.

Since our free Venetia will secure a higher degree of freedom in general to her citizens, this will apply as a consequence to historians themselves, a tiny minority of people, privileged to be paid to dig into the past, and not into mines.

The author didn‘t add any Information to his profile yet.
Accesso in corso...