How the Swiss can retaliate against Italy

This global economic crisis is having disgusting political repercussions within Europe. Switzerland is being subjected to unacceptable pressures and treatment, and European people must defend this beacon of civic social structure against the wicked intentions of some rogue European governments.

As with any plague, the weakest are doomed to perish and the strongest are likely to survive. With this unusually harsh recession, countries with inefficient government, like Italy, are facing imminent bankruptcy. While countries with a responsible political system, like Switzerland, are able to provide a stable backbone to its economy. END_OF_DOCUMENT_TOKEN_TO_BE_REPLACED 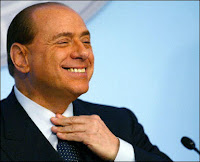