Local officials estimate that thousands of people will participate, and police officers have been mobilized to guarantee safety concerns because of high tourist season in the most visited city in the world.

In January 2012 a scientific poll published by Il Gazzettino newspaper showed 53% of Venets favor a referendum for independence to be held in the 5 million people area. A poll conducted by Il Corriere della Sera national newspaper in early September (during the Barcelona pro-Catalan rally) reported an 80% approval of an independent state in the Veneto, while the most recent poll by Il Gazzettino shows, this week, a 70% approval for independence of Veneto from Italy.

After the rallies in Barcelona and Edinburgh earlier in September, the Europe-wide call for political independence is spreading to the Veneto region of Italy, where the economic crisis is hitting hard a region that has been historically impatient with the centralized government in Rome.

Earlier in Spring 2012 Indipendenza Veneta’s Chairman, Prof. Lodovico Pizzati, has presented a petition with 20 thousand signatures to the Regional Governor Luca Zaia, requesting a referendum for independence. The Governor has immediately inquired on the legality of such a referendum, similar to that scheduled in Scotland.

The matter is to be discussed in Veneto’s Regional Council later in October, and this Saturday October 6th, Indipendenza Veneta will bring thousands of its supporters to the gates of the Regional Council in Palazzo Ferro-Fini, in the heart of Venice. This is an unprecedented event in Italian history which is already attracting a lot of media attention as it represents a very different approach from that of the Northern League. 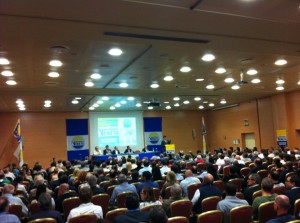 “Every poll shows that a great majority of Venets is broadly in favor of independence, and we cannot wait any longer!” shouted Prof. Pizzati in front of 500 supporters at the movement’s convention in Treviso on Thursday September 27th. “It’s time for action and we will bring to Venice the Resolution that must be voted urgently right inside the Regional Council!”

According to rally organizers the Resolution to have a referendum on independence will be signed by the thousands expected to join in the rally in front of the Regional Council on October 6th. The signed Resolution will then be brought inside Palazzo Ferro-Fini.

The author didn‘t add any Information to his profile yet.

Want to join the discussion?
Feel free to contribute!