Indipendenza Veneta appeals to the EU with massive signature drive

Pizzati: “The international community must protect and promote a referendum on Venetian independence”. Venetian regional government calls for an extraordinary council meeting on the issue. 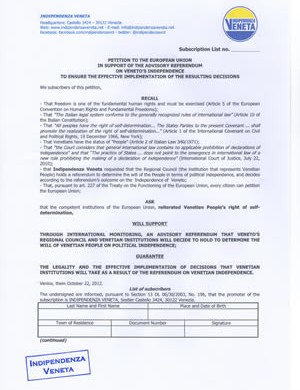 [Press News Veneto – Venice, 25/10/2012] – The political movement Indipendenza Veneta announced today it will gather 30 thousand signatures for a petition for a referendum to be presented to the European Union by the end of the year.

“We have already delivered 20 thousand signatures to the Venetian regional council asking for a popular vote on becoming an independent nation just like Scotland and Catalonia are doing. And a surprising 42 out of 60 regional council persons have undersigned it,” said Lodovico Pizzati, Indipendenza Veneta’s leader. “We will now show to the EU that our drive for a referendum is supported by a majority of Venetians, as demonstrated also by several independent opinion polls”.

The drive for a referendum seems to be in conflict with the Italian constitution call for Italy’s indivisibility, but Indipendenza Veneta argues, correctly, that According to International Law (Article 1 of the International Covenant on Civil and Political Rights, 19 December 1966, New York) the international community “shall promote the realization of the right of self-determination.” The same Italian constitution contradicts itself as it also states that Italy must respect international treaties. On the issue of a new independent state within Europe, José Manuel Barroso, EU Commissioner, stated that “in case of secession a solution must be negotiated according to international law.”

The new Venetian Republic would entail the current territories of North East Italy, it would have a population of 6 million people and one of the highest per capita GDP in Europe.

Because of the evident surge in independentist sentiments among a wide majority of people in Veneto, the Regional Council has called for an extraordinary council on the referendum for independence to be held in mid November. In that council the order of the day is to decide to officially ask for international monitoring by the European Union of an advisory referendum on Veneto’s political independence from Italy.

The author didn‘t add any Information to his profile yet.
Accesso in corso...